Midgley's of Normanton
West Yorkshire
Normanton derives its name from "farmstead of the Northmen or Norwegian Vikings".45 It became a  a coal mining town in the 1800's on the exposed coalfield of West Yorkshire, the largest coalfield in the U.K. but is surrounded by agricultural pursuits. On the 2nd. October, 1886 a mining disaster occurred at Altofts, Normanton. Normanton has a large church, All Saints, dating back to the 1300’s. Normanton was likely to have seen an influx of Flemish weavers probably  in the1400’s as Edward II encouraged them to settle in England in the 1300’s. There are monuments to the 1500’s and 1700’s.
Nearby Altoft’s Hall is the birth place of Sir Martin Frobisher. Woodhouse lies about a mile south of Normanton. The eldest daughter was working  as a house maid at Badsworth Hall at the time of the 1851 census. Joseph was father to William Walter Midgley snr.6 married to Susan /Susannah /Susanna Cheesbrough of Kirk Smeaton. Her father is recorded as Abraham Cheesbrough of Kirk Smeaton his origins are a mystery. Joseph and Susannah were married 17th December 1799 at Normanton.
All their children were christened at Normanton. Only the birth place of Elizabeth at Fixby is known at this stage, Fixby Hall is situated N.E. of Huddersfield.42
FIXBY was the smallest township in the Halifax parish with a population of only 400 in 1851. It is situated in the south east of Calderdale but is now part of Huddersfield (Kirklees). Depending on the period involved, research in this area can be a problem requiring visits to both the Halifax and Huddersfield record offices.
Joseph Midgley of Hambleton
The son of William Midgley of Burn. He was born in 1771 at Hambleton near Selby, Yorkshire.42 Baptised 15th October 1771 at the parish Church at Brayton.


In the 1841 census for Woodhouse, Normanton he is recorded as Joseph Midgley, farmer, 65 years old, his wife Susannah 50, daughter Susannah 25, Elizabeth 20, Joseph 20, Susannah 4. Others present in the household were: Mary Righton 10 and Joseph Righton 15 [M.S.] = man servant? It appears that Joseph and Susannah were housing Mary and Joseph after their mother, Sarah Midgley, died prematurely and their father had remarried.

On the 1851 census, Joseph recorded his birth as being at Hambleton. According to his headstone in Normanton parish churchyard, Joseph died in 1851. In the census of April 30th 1851 he was recorded as aged 80 years.1 Joseph may have had older siblings as nine years elapsed between his father's marriage and Joseph's birth, but these siblings have not yet been totally identified.
Later Joseph became a farmer of 106 acres at Woodhouse, Normanton near Wakefield [1851 census], where he was married to Susannah Cheesbrough of Kirk Smeaton on the 17th December 1799 at the age of 28. The 1851 census shows Joseph's son, also Joseph and two labourers were employed.42 According to his headstone in Normanton churchyard, Susannah died about six years before Joseph on the 26th June 1845 aged 68 years. For the origins of Joseph's parents see Midgley's of Selby.

*       = migrated to Nova Scotia in 1882 then California, Susannah [Worsham-Wyatt] joined the family there later.
xxxx  = evidence of twinning

"In 1848, the opening of the Wakefield, Pontefract and Goole railway line through Featherstone, provided the basis for large scale coal mining in Featherstone, by opening up new markets in the south of England and Europe. Coal had been mined at Featherstone since the 13th century and remains of bell pits can still be seen to the north of Park Lane at North Featherstone.Ackton Hall and its Featherstone estates, previously the home of the Lords of the Manor, was sold in 1865 and from that time mining developments were rapid, and the population boomed. The completion of the railway encouraged exploratory boreholes to be drilled to discover deeper coal seams.
In 1866, when George Bradley, an entrepeneur from Boston, Lincolnshire, bought the Ackton Hall estates, he leased land to John Shaw who opened a new colliery called Featherstone Main. Seeing the possibilities, George Bradley opened another called Manor Colliery. Shaw was successful at Featherstone Main, once the largest colliery in England, but Bradley, through lack of funds, and misfortune, failed with four collieries in the area.
Lord Masham, a successful mill owner from Bradford, bought the estates and provided money for development. Ackton Hall Colliery (Masham's) was a success and he began to provide social facilities such as housing for the new community.
The new town of Featherstone was developed in the field between Ackton and Purston as a mining town with good quality housing and social services."
"This is Featherstone". -Thanks go to local historian, Tony Lumb and the  Featherstone Local History Society

3.Sarah Midgley
Joseph's second child.Christened 16th May 1802 at Featherstone died prematurely at the age of about 29 on the 15th March 1832 at Normanton.6 Sarah (of the parish of Normanton) married by banns William Wrighton [Righton]on the 8th December 1821 also of this parish, they both signed their names48
A later entry in the parish church record shows that William Righton, widower of the parish of Normanton married by banns Mary Pearson of the same parish (made her mark) on the 29th March 1837. From the death register entry, Sarah died at the early age of 29.49 Sarah had five children all baptised at Normanton49.
1. John bap. 8th Sept. 1822
2. Joseph bap. 30th May 1824
3. Caroline Midgley bap. 25th Dec 1826
4. James bap. 26th April 1829
5. Mary bap. 22nd May 1831.
The1841 census1 for Woodhouse, Normanton has Sarah's parents, Joseph farmer, 65 years old and Susannah 50 with  daughter Susannah 25, Elizabeth 20, Joseph 20, Susannah 4. Others in the census household were:  Mary Righton 10, Joseph Righton 15 [M.S.] = man servant? It appears that Joseph and Susannah were housing Mary and Joseph after their mother died prematurely and their father had remarried.
4.William Walter Midgley
Christened 3/11/1808 at Normanton.6 The eldest male in the family. A farmer later at Cawthorne (Cawthorne register,Wakefield Archives)
William Walter Midgley and Sarah Ann, his wife moved from Normanton to Cawthorne about 1844 (from childrens christening records).
See Midgleys of Cawthorne

5.Joseph Midgley
Born at Normanton (42).Christened 3rd February 1811 at Normanton.6 the 5th child of Joseph Midgley and Susannnah, this Joseph appears to have died young as a later Joseph is named in 1820 The following note appears in Baine's Directory of 1822 for "Professions and Trades" in Normanton:


In the 1881 census Annie, Emily and Clara are shown living separately from their two brothers with their mother Susannah W. Midgley at a cottage at Ledsham. Susannah described herself in the 1881 census as an annuitant and dress-maker., her three daughters were 12, 11, and 9 year old scholars.

Andrew Wyatt reports that Susannah Wyatt had a sister Mary and brother Thomas. Susannah's grandfather was William Cooper Wyatt, whose father was George Wyatt, d. 1792 in Islip. George's brother was William. The Wyatts were farmers and butchers, this family can be traced back to 1426 in Charlton on Otmoor near Oxford

Elizabeth Crowther, wife of David Midgley was born at Fixby42/Greenstyle in 1818.44. In the 1851 census described as wife to David Midgley, married 33 years old living at Woodhouse near Normanton. In the 1881 census, described as a 63 year old married farmer's wife, to David Midgley.44 In the 1881 census David and Elizabeth had living with them their son Thomas Midgley and their grandsons Frederick and Walter at the farm at Ledstone. The parents (William Midgley and Susannah Worsham) of these last two were not present in the household at Ledstone, William had died and Susannah had migrated with the rest of the family.
William [b.1840] died at a relatively young age in 1874. As a consequence of his early death the girls lived on with their mother whilst the two boys went to live with their grandparents, David and Elizabeth. In 1882 David and his wife Elizabeth, Thomas his son, David's sister, Susannah and David's grandsons Frederick and Walter migrated to Nova Scotia, Canada and later re-migrated to California, USA.Susannah, mother of William and Frederick later followed them to California. Susannah arrived in or before 1895, presumably after her daughters were married, Susannah married  a second time to Michael Hefferen, he died shortly after, Susannah then went to reside with Frederick and his family until her death in 1905.2
See Midgley Gedcom download page 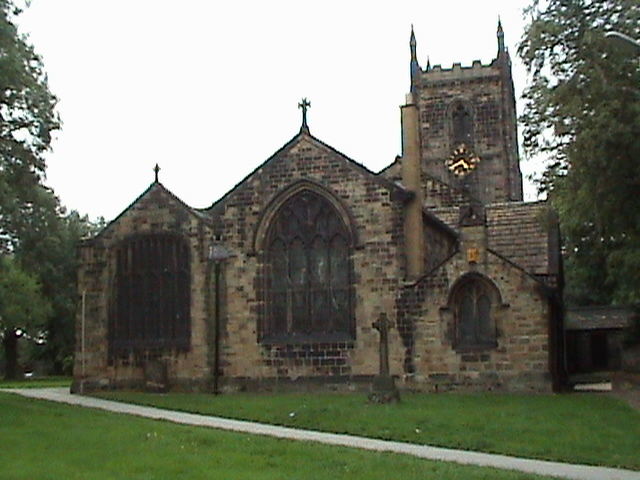